History in the United States

1961
Four of our Sisters first came to the United States from Italy in 1961. They arrived at the Saint Joseph Cupertino Convent at the Conventual Francican Friars’ formation house in Ellicott City, Maryland. With much motherly love and care, our Sisters served in the kitchen and the laundry for the Friars, teachers and students. Without knowing the English language, they slowly learned how to ‘navigate’ in the American culture from this rural setting between Baltimore, Maryland and Washington, DC. We served there from 1961 through 1994. The numbers of Friars varied over the years, and there were always three or four Sisters there. Known for our simplicity, hospitality, sense of humor and prayerful spirit, many Friars lovingly consider us family for their experience of our Sisters’ influence on this formative setting for the Friars in the years following Vatican II.

1962
A second group of Sisters arrived in the United States in April of 1962, destined to open another community at the service of the Friars in formation. Saint Clare Convent at Saint Hyacinth College Seminary in Western Massachusetts offered a philosophy curriculum for the student friars who would continue into theological studies toward priesthood. Our Sisters provided the meals, clean laundry, mending, and new habits for the many that passed through this setting. Our community there closed in 1989 with the Friars’ decision to educate those in formation elsewhere. Our Sisters who served there remembered learning English with the help of the Friars, welcoming younger Sisters from Italy to study, enjoying the country setting with its garden and some farm animals, great winter snow storms that seemed to last forever, and the ever-present prayerful liturgies and song that were so much of that shared Franciscan life.

1971
Our Mother General Madre Amalia Manenti visited Saint Joseph Cupertino Convent and Saint Clare Convent in the States in 1971. Together this ‘small gathering’ was divided by a six hour drive by car, and it had already seen its share of sicknesses and returns of our Sisters to Italy for various reasons. Our Mother General named Sister Norbert Petrucci, one of the Sisters who were in the first group to arrive in the States in 1961, as the General Delegate for these two communities. A common desire to welcome American vocations, grow in number here, and establish our congregation led us on.

1975
In the early 1970’s, Sister Norbert and the others started looking for a house to call their own. Hoping to establish our Franciscan way of life in this culture for the future, she found a large house in Holyoke. There, we would be close enough to the Friars for support, and separate enough to establish our identity as women religious in service to the local Church, the Diocese of Springfield, MA. New ministries were opening up to the Sisters as they learned the language, did specific studies for social work, nursing, or teaching, and became more present in parishes. A Franciscan oasis, this home and its addition in 1984 serves as our Vice Provincial House. The grounds are a lovely place for retreats and large gatherings for our residential Sisters, visiting Friars and community friends.

1982
In 1982, Sister Massimiliana Zugno (+ 2005) arrived from Italy to be the Formation Directress for those who were entering our community here in the States. She served here for five years, during which the addition was added to the large house in 1984 in Holyoke, Massachusetts.

1989
Due to a decrease in numbers of Friars at Saint Hyacinth College Seminary, our Saint Clare Convent in Graby, Massachusetts closed in 1989. This event allowed our Sisters from Italy who had served so lovingly to turn toward sabbatical times for rest, English language studies, High School Equivalency Exams and ministries in parishes. Sister Lorenzina, Sister Clare, Sister Grace and Sister Noemi were there when Saint Clare Convent closed.

1994
When Saint Joseph Cupertino Convent closed, our Sisters who were already working at Saint Stanislaus Parish in Chicopee, commuting from Holyoke, actually, since 1983, moved to Assumption Convent on Springfield Street to be closer to the parish. This arrangement was provided by the Friars’ renting the empty convent for us. Two more Sisters could join them from Maryland. Sister Lorenzina and Sister Norbert were already working in pastoral care at the parish, and then Sister Mary arrived to work in bereavement there, and Sister Elena came to cook for the Friars. This convent remained open until 2003. When the Diocese needed the Assumption property for other purposes, we left that site to live in Mother Angela Convent in Chicopee, a house we bought, with the help of our benefactors.

Another opportunity in Staten Island, New York opened up for a year in religious education at Our Lady of Pity Parish. Sister Norbert, Sister Clare and Sister Grace served there from August until June 1994.

1995
In 1995, our Mother General asked our Vice Province to welcome our Sisters who were preparing to open a mission in the Philippine Islands. One from each country – Korea, Japan and Zambia came to spend about a year together in our Saint Francis Convent in Holyoke. Getting to know each other, they learned and practiced the English language, and prepared for their future life as an international community. Sister Martha, Sister Maximilian and Sister Charles have now all moved on from that mission, after serving to build a strong foundation.

1997
We served in religious education and pastoral ministry in two linked parishes in Niagara Falls for five years. We had been invited by Bishop Grosz, Auxiliary Bishop of Buffalo, NY, and then the pastor of the two parishes. Sisters from Italy, Zambia, and Korea served over the years, three or four at a time, in the former convent of the Franciscan Sisters of St. Joseph from Hamburg, NY.

1999
Assisi Convent at Immaculate Conception Parish and School in the Bronx, NY began at the invitation of the Capuchin Friars in 1999. They served as missionaries in Zambia near our Sisters. Sisters from Italy, Zambia, Romania, and Korea served there together at various times in various ministries. Due to the school’s low enrollment and staff reductions the Convent closed in spring 2011.

2001
Sister Lory lovingly cooked and did laundry for the Friars for many years, visited elderly parishioners in both Chicopee and Niagara Falls as a Eucharistic Minister, and stitched many ‘Punto Assisi’ embroidery pieces that highlight our Franciscan saints and heritage. While serving in Niagara Falls, she returned to Holyoke after being diagnosed with pancreatic cancer. She surprised and edified all when she expressed her desire to go to Assisi and to her home, Campobasso, in Abruzzo, Italy, while she was still strong enough to go to ‘say goodbye.’ Her love of religious life, her desire to laugh, her hard-working spirit, and her sensitive care remain. She died on Palm Sunday, April 8, 2001 in Holyoke, at home, surrounded by the Sisters who lived there at the time. Father James McCurry, OFM Conv. had celebrated Mass and offered her the Anointing of the Sick at the convent that morning.

2004
Mother Angela Convent opened in 2003 when we purchased it. Currently Sister Victoria, Sister Norbert and Sister Cordilia live there. It’s an ideal location close to Saint Stanislaus Parish and the College of Our Lady of Elms. Mother Angela Convent was conveniently accessible to those who work in pastoral ministry, religious education, youth ministry, are completing their studies at school.

2011
In August and September, one by one, three of our Sisters arrived at Most Holy Trinity – Saint Mary Parish in Brooklyn, NY to assist our Conventual Franciscan Friars. Our gradual arrivals were due to the Friars’ and parishioners’ loving extended renovations to the third floor convent for us. We would name our home ‘Portiuncula Convent’ in honor of the parish’s patrons honoring the two parishes that merged in 2007. Our presence was a ‘homecoming’ to our Friars and our Sisters who had known each other when our Sisters served in the Friars’ formation houses. Our ministries in the school, religious education program and sacristy brought back the witness of women religious to the parishioners after the departure of the Dominican Sisters of Amityville from their first site in America. What an honor to continue the tradition of living and preaching the Gospel life in this multicultural setting! 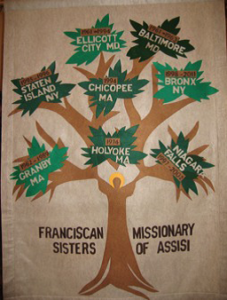