Think of your own vocation:

Where has your life taken you in response to the call within you and around you?
Have you remained single? Have you married?
Did these life calls and life choices bring you happiness?
Did you do all you could to remain faithful to your particular life course?
How did you deal with learning that there was a real curve or change in the road to come?
Can you still hear Another’s voice today?
Are you still sure that the Shepherd, whose voice you recognize and love, will always guide you?

I will share my vocation story by the ages I was so that you can reflect on your own life stories and be reminded of how you felt at various stages of development and maturity. We will see together that our own life commitments may be different, but that we all ‘went to different schools together,’ we have all gone through certain experiences of growing up, moving away, loving and being loved, bearing fruit, and looking forward to more in the future. We have all had our share of heartache and discouragement, pain and problems on whatever vocational road we have chosen, as well. But, hopefully, we can all-see that the road was ours to make and the Shepherd will continue to guide us until the end.

At around 11 years of age, in 5th grade in Saint Mary’s Elementary School in Clinton Heights, NY, just outside of Rensselaer, which is just east of Albany, across the Hudson River in upstate New York, I remember going to Mass on Sundays, often singing in the choir loft with some friends, sometimes sitting alone in the church. At that age, I remember listening to the prayers at Mass, especially the three that the priest would say as we all stood and waited for the ‘through Christ our Lord, who lives and reigns …. , ‘ or some variation of it, and I remember thinking ‘I could say that prayer as if it were from my own heart … ‘ I found the words of the priest rang true, whether he was asking for guidance, or peace in the world, or for us to be like some saint or another, or for eternal life for someone or all of us. I just remember that the Mass and the praying we did together made sense to me.

Do you remember when you were 11 or in 5th grade?
Was church a part of your life?
When did your first take our common prayers to heart?

As a junior in high school, I was about 16 years old I was in the public schools by then, since seventh grade, when my older brother graduated from eighth grade and we could really no longer afford the tuition in the Catholic school for the three of us. (I have two brothers, now married, with seven children between them. Charlie is two years older than me, and Mark is three years younger than me.) At 16, I was a good student, enjoyed writing for the literary magazine, sang in the folk group and taught catechism in my parish. I was quiet, and often serious, but had a lot of friends in the neighborhood and at school. One friend told me one day at school about a retreat program for high school students that the Conventual Franciscan Friars, whose last four years of seminary before Ordination to the Priesthood were held at Saint Anthony on Hudson in nearby Rensselaer. She belonged to a parish where the Friars taught catechesis and they were all invited to this weekend retreat. I hoped to go, but she said it was just for the students of the Friars, but she called and asked if I could go, or maybe I called, I don’t really remember well, but we were told it was alright for me to attend I went and enjoyed the time: learning about the life of Saint Francis of Assisi, hearing how the Friars served all over the world, playing games, singing songs, reflecting on the Scriptures, hearing talks by Sisters of the Resurrection from Castleton, NY, making friends with other kids who felt church was worthwhile and were growing in faith and practice. I continued to go for five years, through my junior year in college, after which I entered the community. In those years of retreat experiences, I also began to value volunteer service in different ways. I saw good Christian examples of service around me in teachers and leaders in my parish, and I worked for three summers for the Wildflower Camp: we took inner-city kids from Albany to the beautiful mountains and lakes of Weston, Vermont and learned much about each oilier: rich and poor, black and white, mostly Catholic, and all just out for a great time. I was the cook, and sometimes a teacher, all of us were parents and sisters and brothers and we tried to meet whatever needs these kids presented to us, all in the spirit of the Gospel.

Where were you at 16? At 18? At 20?
What experiences seemed beyond your reach, but suddenly and providentially fell to you?
What breaks did you have that have made all the difference in your life?
Who were the people at those ages that have had the most influence on your life?

My meeting the Sisters happened in this context: among the retreat experiences, among the volunteering, and I continued to pull this golden thread of Franciscanism, self-giving, and, eventually, a life choice through my later high school and early college years. When I was a freshman in college, at 18 or so, commuting by bus to Albany to attend the College of Saint Rose as an English major, the Friars started working in my home parish. One Sunday, after Mass, in the cafeteria where we hosted ‘coffee and donuts,’ one of the Friars was speaking to two of us young women about the Sisters he knew in Massachusetts who had just bought an old house in Holyoke. Some Sisters had moved there from the Seminary in Granby, where he had studied and they had worked in the kitchen and the laundry. He spoke of them with much regard: as fun-loving Italian women who were great cooks, as very courageous and faith-filled women to seek to establish their community in the States and to buy this house for a novitiate where new American women could become Sisters, and just down-to-earth, common and simple people who were doing much of the renovating, scraping and painting, wall-papering and yard cleaning work themselves. Hearing about them intrigued me: being somewhat shy, I resolved to ask him for their address if I saw him later along, and I saw him in the parking lot just before I left and we went to the sacristy where he wrote the address for me.

I wrote, visited for two and half years before entering in September of 1978, and thoroughly enjoyed those gradual and yet very-involving visits that included prayer, scraping, painting, wall-papering and yard work, as well as fund-raising for the Sisters as they sought to establish themselves in this new home, all for them, to hold their hopes for their future here in the States.

What direction in your life was gradual and yet constant so that you knew it was God’s will?
Who were the people that God used for you to come to accepting God’s will?
What was it about God’s voice, or the circumstances that God used, that made it all so attractive?
What helped you to decide: to enter? To take that job opportunity? To ask her to marry you?
To say yes to his proposal of marriage? To move?

Throughout my life in the community, I have had a number of opportunities I had not foreseen to be awaiting me: learning the Italian language and going to Italy three times: to study first for a year when I was 24 and 25 years old, to attend an international meeting of our Sisters in Assisi, Italy at 37, to translate from Italian to English for our General Chapter meeting, again in Assisi, at 38. I have been living with Sisters from ten nations of the world, working around the Hispanic community in Holyoke, rubbing elbows with the Vietnamese community in Springfield, and refound my own pride in my Canadian French and Irish heritage as an American. All of these experiences cost us: we pay for them in personal growth, in becoming different, in changing our outlook and our approach to life, and, hopefully, our world around us is a little better because of it.

I have asked all of these questions in the context of vocation, in discussing our choices in response to God’s call in our lives, both from within us and outside of us. I truly believe that God loves each of us and needs each of us to carry His Gospel message of Christ’s life, death and resurrection to others. I believe we will each experience that death and resurrection over and over in our lives as a real part and parcel of our identity as baptized Christians. The only true challenge throughout our lives is to welcome both the plans and the joys as ways to find God, as places on the continuum between birth and rebirth, and to share our findings with others along the way. I hope that this short life story and this short sharing on vocation have helped you to appreciate some of your own experiences as making you unique in God’s plan and keeping you faithful to His wonderful love. Thank you for your witness along the way and let us keep each other in prayer as we continue to journey together. 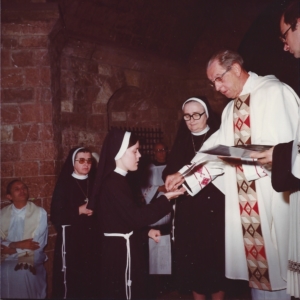