What treasures will I leave behind when I die?

What treasures will I leave behind when I die?
-Sister Carol

I have had the privilege of going through the photos left by +Sister Noemi Ledda, who died on September 17, 1997, and +Sister Lorenzina Di Iorio, who died on April 8, 2001. Both of them had served more than thirty years each as missionaries here in the United States. Their ministry, for many years, was service in the kitchen and laundry of the novitiate and seminary of the Conventual Franciscan Friars, in Ellicott City, Maryland, and Granby, Massachusetts, respectively. Their lives could be characterized by what our Pope Benedict XVI is speaking of as ‘spiritual maternity’ – the prayerful, active, warm, encouraging support of vocations to the priesthood and, in our case, religious life, that he has called for during this Year of the Priest.

One picture was present in almost all of +Sister Lori’s little books of photos: the life-sized, carved, wooden statue of Mary, holding a golden basket, which served as a Tabernacle in our chapel at Saint Clare Convent in Granby, Massachusetts. Flanked sometimes by red roses, or white lilies, or Christmas cacti or poinsettias, this Madonna held, in every case, our Sisters’ object of devotion and dedication: Jesus in the Eucharist. Just as Mary held a basket to serve, feed, and nourish those gathered to know Jesus, so our humble works somehow served the needs of the gathered community and, somehow, the universal Church, since the Friars, too, would become missionaries of the Gospel in their own time, in their own way.

I can imagine her bringing these pictures to her family in Campobasso, Italy, every three or four years. Or sharing them with our Sisters in Assisi. I can still hear her Italian accent and ready laugh as she shared the joys of her ministry, the names of our Sisters with whom she served, the pride she felt in seeing her Friars move on. She was grateful for the basket she held in their midst: sometimes it was full of fresh pumpkin rolls; sometimes it was full of embroidery thread for the ‘punto Assisi’ altar cloths, corporals, or wall hangings that she loved to work on and share. Sometimes she held the basket of her prayer, her hopes, her willing understanding, and her kind forgiveness. The work of her hands, also, somehow, became the Bread of Life, a sign of God’s great love for all through Jesus.

Thank you, +Sister Lori, for another gift! May all who gather before Jesus in this same Tabernacle, now in our Vice Provincial House in Holyoke, find his presence and peace! 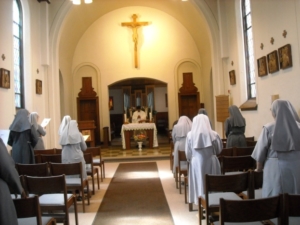