Our Founding journey can be distinguished in two phases.

From 1702 until 1725, we experience internal economic difficulties and external moral opposition to the work, evident in both
Assisi’s environment concerning Franciscan spirituality, met by Marcheselli’s goal of renewing the Third Order movement
and del Giglio’s personal efforts to acquire the house for her school, providing a specific method aimed at a particular group.

The Franciscan dimension of this presence and work, which Marcheselli supplied, would sustain del Giglio’s educational project.

On November 16, 1723, the contract stipulating the acquisition of the house …. On December, 15, 1723, once all was brought to its rightful conclusion, Marcheselli sent a significant letter, to Sister Angela, our Foundress, that recounts, beyond all of the contention, the spiritual perspective with which he was able to live through and interpret the whole affair.

He writes with encouraging, paternal tones that support the life of the community. The text is of high spiritual caliber and, often through a veil of irony, he is able loosen up the ‘crosses’ of the one to whom he is writing, Sister Angela.

“In the Sacred Scriptures, it is said of the Church of the Lord that the holy Faith was contradicted and persecuted from every side. Sons accused their fathers, fathers accused their sons …. For you to tell me that all are against this House, then, is to tell me that God wants to privilege this House, and that God looks upon it in the same way that He looks upon His Church. Therefore, I do not know why you have to complain, and be so crucified about these things that happen. Let the Lord work. …. Give it all to God. Do not suffer any more about it. The saints won over those who cursed them and the martyrs won over their tyrants … neither by resisting nor by complaining about their enemies and those who afflicted them but, rather, by suffering, and by doing so patiently. You are to do so likewise. Do not struggle, do not be disturbed. There is God! There is God! Let God work it out, so that this poor House, I hope in the Lord, will be, and will always be, His, and remain under his protection. And with its being under His protection, what is there to fear? ‘If God is for us, who can be against us?’ If this small gathering was applauded by all, and helped by all, I would fear immediately that it would not last very long. But since it is unjustly contradicted, I firmly hope that it will powerfully establish itself and it will always be a house of the Lord. Therefore, I will speak to you with the very words of the Lord: ‘Fear not, little flock, because you have found favor with the Lord.’

On October 31, 1724, the house next door was acquired by purchase, allowing the school to accommodate its growing needs. Mother Angela also obtained permission from the Pope to erect an oratory.

1725 marks Father Marcheselli’s return to Assisi from Rome. He had served as the Superior at the Friary of the Holy Apostles in Rome for two years. That site is currently the General Curia of the Conventual Franciscan Friars. He established an archive to document the formal beginnings as he sustained the work’s direction with his Franciscan spirituality, his continuing commentary on the Third Order Rule.

The second phase, from 1725 until 1742, is when the project grows and matures: On March 9, 1726, the first Mass was celebrated in the new oratory, furnished through the generosity of benefactors from Vicenza, her home.

In 1729, a smoke-blackened kitchen was repainted and cleaned to be utilized as the choir. Once completed, ‘on the vigil of the Immaculate Conception, they began to chant the Office of the Most Blessed Virgin, beforehand having only been able to recite together, in low voices, while working, the Our Fathers that were prescribed in the Rule of the Third Order.’ Plasterwork on that kitchen, made choir, would be completed in 1737.

On September 11, 1931, the Sisters acquired the house across the street, allowing for ten new rooms for the students’ use. In 1732, the Bishop’s canonical visitation to the House ‘of Sister Angela’ found it in order, as a community and as a school.
The second Mass was celebrated in August, 1733, through the Bishop.

On September 22, 1736, Mother Angela acquired the permission to build the suspended arc across the street; the work was begun on the 24th and completed by the 30th… to avoid needing any recourse to Rome.

Father Marcheselli gave Sister Angelina Pani, Mother Angela’s niece, the task of leading the community and continuing the school, since she had many of the talents necessary to keep this poor ‘Pious House’ going.

She continued with the structural adaptations: she organized the laundry, created a space for another oratory, wherein the Way of the Cross was installed on May 21, 1737 and, in July of 1739, she made windows in the room where our Mother, Sister Angela, had desired to make a hermitage in honor of Saint John the Baptist. She was revered by many in the city.

His Friars gave Sister Angelina the framed picture of the Immaculate Virgin, in the mystery of her Immaculate Conception, that he had prayed before frequently in his room.

The Custode of the Sacred Convent wrote that ‘those religious women were uninterruptedly, for 39 years, 4 months, and 15 days, formed, directed, and governed, in praiseworthy and holy ways, along the way of perfection’ by this man who was ‘greatly spiritual and gifted with particular virtue.’ He continued to recount our Founder’s death: ‘Consumed by his daily rigor of life, by the demands of his studies, and by his efforts, he was assailed by a brief but violent illness, and he died a beautiful and serene death on May 16, 1742, at the age of 66. 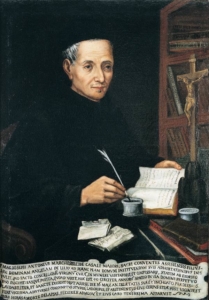 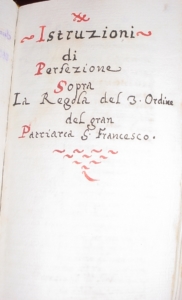 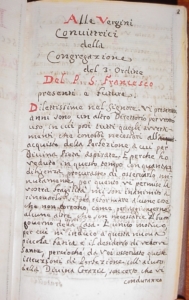