“I have believed that a phone call I received was from God!”

In my early twenties, I had to move to another city for my job. It was my first time to leave my mother so long. I had two older sisters who got married and each of them have one daughter and one son. While I was in Pusan, I had attended a Franciscan parish where our Sisters were working, taking care of children from lepers’ families. I saw the Sisters as mothers of the over one hundred children. Sometimes I visited the children’s house if I could find something to do for them. One day, one of the Sisters told me it would be good if I could knit sweaters for the children because they needed warm and motherly love since they were living far away from their parents, so I made tons of sweaters. I think that because of my faithfulness to what I was doing, a Sister asked me if, perhaps, I have an interest in religious life. Those days, I did not know how to say “No”. Therefore, I made up a story. I told that Sister that I had an old mother who relied totally on me, so I didn’t have the courage to say that I wanted to leave my Mom to become a Sister. But, I said, “Whenever my mother is ready to send me, I will come.” My work in Pusan finished, so I went back to my hometown. I forgot about that spontaneous conversation.

Time went by and I questioned myself about what I really wanted to do in my life. Slowly I found myself thinking of entering a religious community, but I had a friend who was waiting for me to marry him. I could not decide anything by myself. One of my friends told me there was a prayer I could say to Mary to receive response about my petition. I decided to pray in a special way. Every morning I got up early and went the Cave of Mary in Dague and prayed faithfully with some of my friends. Before finishing my 54 days prayer, I realized that Mary was with me. Otherwise I could not have been possible for me to get up at 4:30am for 54 days. While I was praying, I found peace in my heart, and already I was ready to do whatever God would tell me. On the day, when we had finished the novena six times, we went on a day of pilgrimage to give thanks to our Lady and the Lord. After the journey, I came back home and my mother told me a Sister from Pusan had called and wanted to talk with me. After I had left Pusan, about two years before, we had not had any contact each other. On the day of finishing my prayer for finding my vocation, I got “the phone call”. The Sister was asking “When are you going to enter?” I did not hesitate in deciding on my vocation. Immediately I joined our congregation.

Sometimes when I have experienced difficulties, I always remembered the phone call which reminded me. “I called you!” I hear it as if God is telling me, again, of His choice. I think God knew how vulnerable and weak I was, so He let me have an unforgettable experience, so I could overcome the hard times. I have been living in religious life for 22 years already. I really appreciate “the phone call”. God called me and kept me in His house to love Him, and to serve His people. We celebrate our life together sharing what we have, and embracing each others’ wounds. 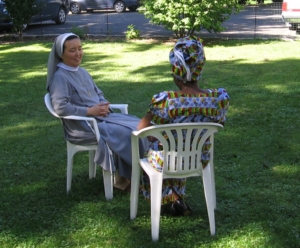