I started thinking of becoming a sister when I was in elementary school. I had moved from my home village to stay with my Aunt in the city in Zambia. I remember making a private promise to the Lord that if I qualified to go to high school, I would commit my life to him. And so it happened that I made it to a girls’ school in 1975. My Aunt was over-protective, to the extent that I barely had any close friends other than her daughter and a few that I mingled with at church when I was finally allowed to join the group of young girls known as “The Daughters of Mary”.

During the community service from the high school, my class was assigned to go and help at a school for physically-challenged children, which is still run by the Franciscan Missionary Sisters of Assisi. I had no idea at that time who these Sisters were; I only knew that Sisters are all the same and that they work for the poor people. I was struck by how the Sisters took care of these children who had different disabilities. I wanted to ask how this group of women came to live together and how they came up with such a great ministry, but it was not possible because, at that time, I was very shy and quiet.

As time went by, and through God’s Divine Providence, I came upon a brochure that had addresses of Religious Sisters, and randomly wrote to one of them, just to try to get more information. It was not until I attended the first week-end meeting that I realized that it was the group where I had gone to do community service!

I finally told my family about my desire to become a Religious Sister. I had good support from my family except for my mother and my aunt who wanted to see me get married and have children. While I understood and respected their views, I had to follow my conscience and aspirations. Unfortunately, neither of my parents was present at my first profession due to circumstances. My father passed away in June 1987, before I made my final vows; but I thank God that my mother was able to travel a long distance and be there for me as I made my total and final commitment to God. This was, and still is, one of the greatest gifts and memories I have of my dear mother who returned to her home in heaven on July 7, 1998, exactly three months after my arrival as a missionary in the US.

I believe that my journey as a sister has been, and still is, a constant conversion through listening to God in Scripture and being attentive to the signs of times; through these two voices of God in my life, I, together with other Sisters, discover what God asks of us in our time period and in different realities.

I’m privileged to belong to an international Institute, our religious congregation, in that I’m able to travel to other countries, live with Sisters from other cultures, and appreciate and value the way other people live their faith and traditions. I have been enriched both spiritually and psychologically. Living in an international community has widened my concept of things. I am blessed indeed!

I celebrated my Twenty-Fifth Anniversary of my first profession of vows in 2005; by the grace of God, I hope to live the rest of my life as a Franciscan Missionary Sister of Assisi. I continue to cling to the words of St. Paul:

“It is not that I have reached it yet, or have already finished my course; but I’m racing to grasp the prize if possible, since I have been grasped by Christ Jesus. Brothers (Sisters), I do not think of myself as having reached the finish line. I give no thought to what lies behind but push on to what is ahead. My entire attention is on the finish line as I run toward the prize to which God calls me-life on high in Christ Jesus” Philippians 3:12-14. 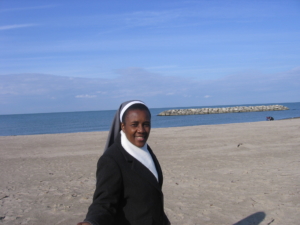