My name is Sr. Dorcas Cordilia Munthali. I am the third born in the family of six. I was attracted by the sisters’ habit when I was seven years old. Latter I discovered that there is some more which I liked about the sisters. I was attracted by their services. I was a member of the “Daughters of Stella” a group for girls at the parish which was ran by the sisters. The sisters used to share a lot about their life and the life of saints. I was attracted by the life of St. Agnes and I felt called at an early stage to follow the Lord. I was 7 years old when I felt the call. My decisions where based on this experience ever since I met the sisters. My family was very supportive and they encouraged me to do want I wanted to. I finished High school in 1989. Six month later I joined the Franciscan Missionary Sisters of Assisi. Since I had applied to go to college before going to the convent, I was given an opportunity to go to college to be certified as a High school teacher in Math. I spent two years in college while discerning about my vocation.

Life at the college was very challenging but I still felt called to be a religious sister. I persevered, two years later I went back to the formation house and I was received as a Postulant. I was happy to have had a college experience because it helped me to discern about what I really wanted to become a sister or a married woman. After one year I applied and was accepted to begin my Novitiate. My Novitiate was very challenging for me because my dad lost his job and I was somehow discouraged. I felt my family needed my support, since I was a trained teacher I would get a job and help them. But as it is, God’s ways are not always my way. I persevered through prayer and discernment. Thank God, my dad found another job. In 1996, I made my first vows. I was happy to be a religious sister.

My first assignment was at a high school for girls. I enjoyed my work as a religious and a Math teacher. In 2001 I applied to serve God for all my life and I was accepted. I am glad I did. I am now a missionary in the United States of America. My first assignment was in The Bronx, it was challenging at first but I got used to the environment and the work. I will always treasure the time I spent in school with the children. 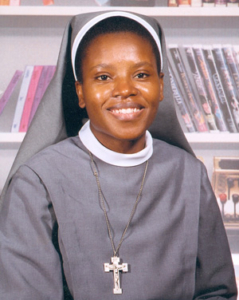 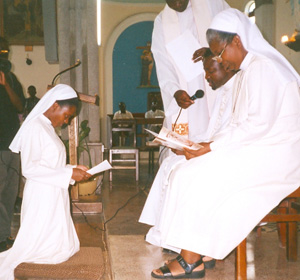